defytime Science Japan's scientific advisor Bill Andrews, Ph.D. has worked in the biotech industry for more than over 30 years, focusing the last 20 years on finding ways to extend human lifespan through the intervention of telomere shortening in human cells.
Bill Andrews, Ph.D. earned his Ph.D. in Molecular and Population Genetics at the University of Georgia in 1981. He was a Senior Scientist at Armos Corporation and Codon Corporation, Director of Molecular Biology at Codon and at Geron Corporation, and Director of Technology Development at EOS Biosciences.

While Director of Molecular Biology at Geron Corporation from 1992 to 1997, Bill Andrews, Ph.D. was one of the principal discoverers of both the RNA and protein components of human telomerase and was awarded 2nd place as "National Inventor of the Year" in 1997 for this work. He is presently a named inventor on [43] US issued telomerase patents.

Telomeres are structures at the end of our chromosomes that shorten every time a human cell divides. Each time our cells divide and our chromosomes replicate, our telomeres become shorter. They shorten throughout our lifetime, and when they reach an average of about 5,000 nucleotides, our cells cannot divide any further, and we die of old age.
This problem is because of a telomerase enzyme deficiency syndrome, or TEDS that affects every one of us. If it weren’t for lack of this enzyme our telomeres stay long and healthy. The length of an individual's telomeres is closely associated with their biological age and research suggests that control of telomere length has the potential to treat many diseases associated with aging.
Only in the last thirty years science has made real progress in understanding the fundamental question of why we age and what can be done about it. These discoveries have not been widely publicized-­‐yet -­‐ and so most people are unaware of how close we are to curing the disease of aging once and for all.

Cause of aging "Telomere"

However, telomeres is required for normal chromosome segregation, since thereby shortening the time a cell divides, the telomeres become shorter than a certain length, cell viability occurs destabilization of chromosomal loss, as a result, it will appear a variety of aging of the body. In other words, the telomere is related to the fundamental factors of human aging. 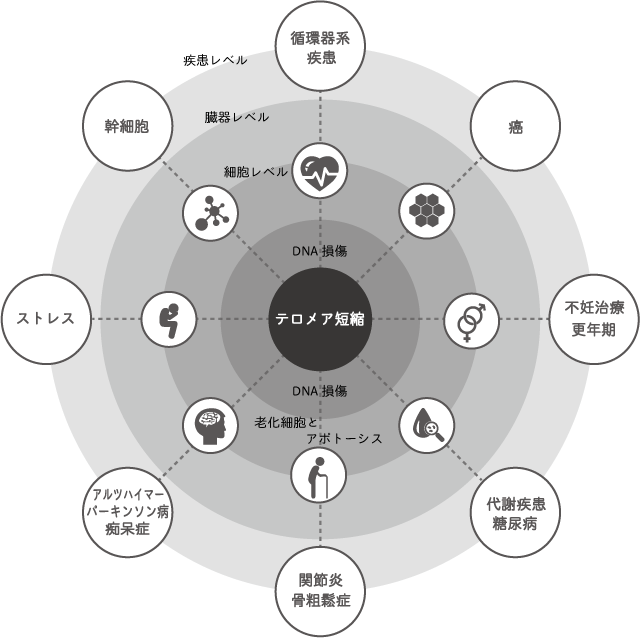 Attention in the world! Telomere analysis by "blood test"

The 2009 Nobel Prize in Physiology and Medicine has been given to three scientists and it is a telomere analysis by blood test that enables chronic diseases and early diagnosis that attracts worldwide attention.
This "telomere analysis" by blood test enables early prognosis for various diseases such as cancer as mentioned in the preceding paragraph, the role as an independent biomarker is enormous, contribution to the future medical care is It is drawing attention from doctors all over the world when it becomes very big.
Among them, the analysis advanced by defytime Science Japan simply does not estimate the average telomere length, but rather takes a histogram of all the telomeres and evaluates the shortened telomere in a comprehensive manner, including the proportion of each telomere per chromosome We have algorithms to properly evaluate, such as hierarchizing the risk of age-related diseases with the enormous data we already have. 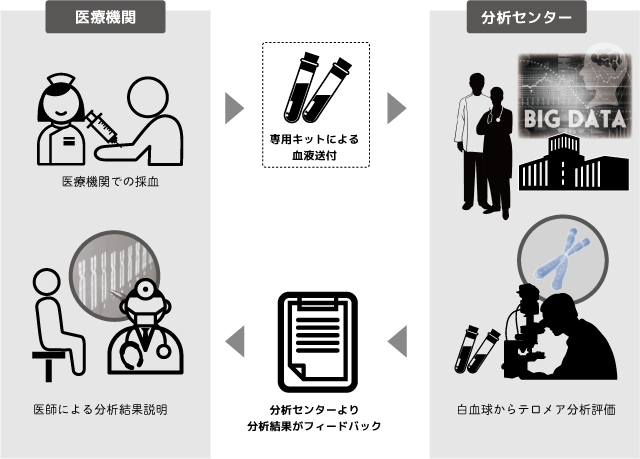 The key of life-span "Telomerase"

Nobel Prize in Physiology or Medicine in 2009, California University of Elizabeth Blackburn (Elizabeth Blackburn), Professor, Johns Hopkins University Carol grader (Carol W. Greider) Professor, Harvard University Jack Zosutakku (Jack W. Szostak ) 3 Mr. professor has been awarded.
Winning reason was the "discovery of the mechanism of telomere and telomerase enzyme, which holds the key to life."
"Telomerase" is the enzyme to extend the specific repeated sequences of telomere present in the chromosome ends of eukaryotic organisms.
However, in humans, and activity was observed in such germ cells, stem cells and cancer cells, and the other of telomerase activity is not seen almost.
Therefore, "the extension of the cell division life" by increasing the activity, in to suppress the activity has attracted attention both in terms such as "cancer treatment" 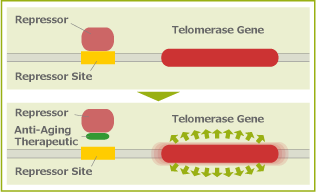 "TAM-818," developed by Bill Andrews,Ph.D. (Sierra Sciences, LLC.) in 2014, is a state-of-the-art substance that prevents telomere shortening.
We began research in 1999, and after investigating nearly 60,000 chemical substances, we finally discovered the first chemical substance with medicinal properties in 2007.
*The patent and product rights for this drug were transferred to the American company T. A. Sciences, and it was introduced into the market as "TA-65" in 2007.)
We proceeded further verification, discovered C 0314818 after nearly 400,000 verification. It is a substance that has also proved the mechanism in scientific terms and also obtained the patent. It is [Telomerase Activation Molecule] a molecule that induces and activates telomerase [TAM]. Indeed, in comparative tests with "TAM - 818" and "TA - 65" found at this time, it is 80 to 300 times more potent than "TA - 65" in telomerase expression that brings about the telomere elongation effect of "TAM - 818 Results have also come out.

"TAM series" means "telomerase activated activator "TAM [= Telomerase Activating Molecule]" which is a research result of Bill Andrews,Ph.D. for over 30 years, which realizes a society in which people around the world can live healthy and live longer."
It is a product series name of "TAM" blend provided by defytime group that was born to provide in various genres.

The TAM series products that are currently available include the latest telomerase-activated activator "TAM" that provides 80-300 times the effect compared to "TAM" discovered in 2001.

Let's check it now. Regain your health with the TAM series.